We will dive into this outage and more in this month’s social media roundup.

As someone who relies on Facebook and Instagram for her job, it was EXTREMELY hard for me to be productive when Facebook crashed and left me and billions of other users unable to use the platform.

Twitter was probably extremely pleased with this outage considering users were forced to scroll through their Twitter feeds to pass the time instead.

Disruption of service started the afternoon of Wednesday, March 13 and lasted for roughly 15 hours. According to Facebook, the outage was a result of a “server configuration change.” Facebook denied the outage was caused from a distributed denial-of-service (DDos) attack (a type of hack where attackers flood a company’s network).

A lot of users were upset over the lack of communication from Facebook during this time. Facebook only tweeted twice Wednesday, and ended things by tweeting a very generic tweet Thursday once they had restored the platform. 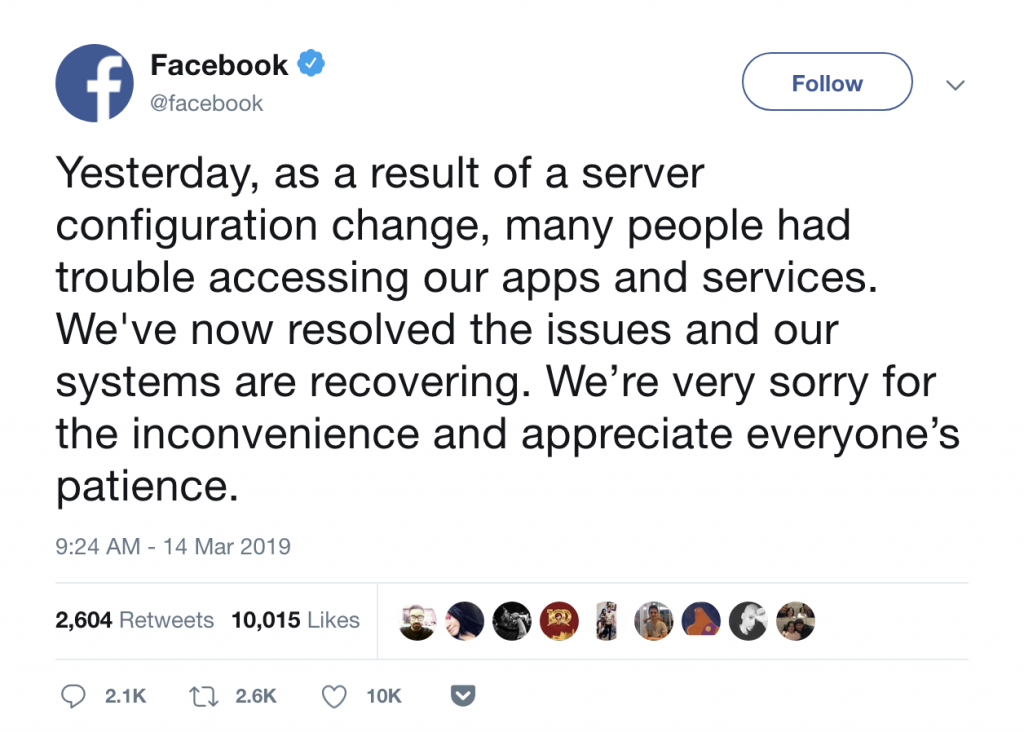 Business advertisers were especially upset because they lost a substantial amount of exposure time for their paid ad campaigns.

Previously, Facebook had banned white supremacy but not white nationalism or separatism. This resulted in a lot of backlash from civil rights groups and historians who say there is no difference between the three.

This is the latest move by Facebook to crack down on extremist ideologies.

Facebook Messenger is getting a little more organized! You will now be able to reply to specific messages within a group chat, which will make it nice when there’s a million conversations going on in one chat.

This update rolled out Wednesday, March 20, so you should be able to use it now.

Twitter is creating a new feature that will allow users to hide replies to their tweets. However, this won’t hide it from other users permanently. Other users will be able to click a “View Hidden Tweets” button to see all hidden tweets.

“We think the transparency of the hidden replies would allow the community to notice and call out situations where people use the feature to hide content they disagree with. We think this can balance the product experience between the original Tweeter and the audience,”  Haq said.

This feature would be tested in the coming months.

Once accepted, you will be able to test multiple design features aimed at making Twitter a more user-friendly platform. First tests are expected to revolve around making Twitter threads easier to read.

If you are given access to the new app, it will take over your current Twitter app. Keep in mind, Twitter points out this a “work in progress” and “bugs are expected,” so prepare for frustrations as features may come and go quickly without any warning.

You will be able to send feedback about new design features directly to Twitter. You are also encouraged to take screenshots of new ideas to share to friends so Twitter can get a broader range of opinions.

Twitter is releasing a new in-app camera that will allow users to tweet out images and videos more quickly. Simply swiping to the left when on Twitter will bring up the in-app camera.

Images shared with the in-app camera have more publishing options than pictures uploaded from the camera roll later.

This will eliminate a few steps from the platform’s current camera mode. Right now, you have to hit “compose” and then hit the camera button to bring up the camera.

The goal of the in-app camera is to increase immediacy, which is the overall mission of Twitter.

Instagram now has its own shopping cart. Users are able to shop and make purchases without ever leaving the app.

These brands will begin rolling out the feature in the coming weeks, with more coming soon.

When you tap to view a product from a brand’s shopping post:

If you are a business owner, you can apply to be part of the beta program here.

Assert yourself as a thought leader in your industry by providing:

You need to have a solid content marketing strategy in place if you expect to win potential customers over.

That was this month’s social media roundup. Stay tuned for next month’s Lately in Social Media: April edition!

If you have questions or comments, we would love to hear them!