To name a few, Facebook is launching their highly anticipated “clear history” tool later this year. Twitter CEO Jack Dorsey teased the idea of the “Edit Tweet” feature…again. You can now donate to nonprofits through Instagram Stories. LinkedIn launched their own version of a LIVE video tool, and millennials trust YouTube more than Netflix and Apple.

Keep reading to learn how you can take advantage of these social media changes for your business as well as predictions for upcoming year trends.

The clear history tool that has been in talks since early 2018 is almost finally here! No precise date has been given, but it will be rolling out later this year, according to Facebook CFO David Wehner.

The tool will give users more control over personal data connected to third-party websites and apps. This is happening in response to the 2018 Cambridge Analytica Scandal that saw the personal data of tens of millions of Facebook users harvested by third-party apps for political purposes.

The feature will let users see information about apps and websites they’ve interacted with and then permit them to delete this information from their Facebook account. This will make it harder for Facebook to use third-party data to target ads to users.

You will now be able to unsend messages inside Facebook Messenger up to 10 minutes after sending the message, for both individual and group chats. This is great if you have ever accidentally sent a message or a funny video to the wrong person.

To unsend a message:

You will always have the option to delete a message just for yourself (not sure what the point of that is?) by choosing “Remove for You.” The message will then be removed for you but not for anyone else in the chat.

Keep in mind that unsent doesn’t mean unseen. But, if you unsend the message quick enough, the other side may still not see the message.

The edit button may FINALLY be happening!

You probably won’t be able to edit Tweets in the distant past (which still sucks), but you may be able to quickly scan your Tweet after hitting send, and if you find a typo, etc., hit the edit button to stop it from going live.

Twitter CEO Jack Dorsey says “the issue with going longer than that is it takes that real-time nature of the conversational flow out of Twitter.”

The CEO explained that if you’re tweeting during a live sports game, “you want to be fast, and you just want to be in the moment. You want to be raw. But if you’re in the context of considering what the president just did or making a particular statement, then you probably need some more time,” suggesting the service could be “dynamic” when it comes to the amount of time people might have to alter their posts.

The direct messages you deleted on Twitter aren’t actually deleted…

Twitter is keeping copies of direct messages sent through the social network even YEARS after users delete them, according to security researcher Karan Saini.

Twitter’s policy privacy states that users have 30 days to reactivate their accounts if deleted. After that 30 days, Twitter is supposed to delete all data associated with the account, which includes direct messages. This may not be the case. Not only does Twitter keep messages from deleted accounts, but Twitter also keeps messages from suspended accounts and may also be keeping messages that active users simply delete. 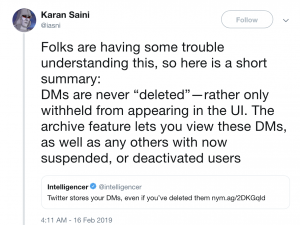 A Twitter spokesperson said the company was “looking into this further to ensure we have considered the entire scope of the issue.”

Youtube’s ability to entertain millennials is one of the biggest reasons it is now the most trusted brand among millennials for the first time, according to a study conducted by Mblm (a study that is the largest study of brands based on emotions).

The study examined responses from 6,200 consumers and 56,000 brand evaluations across 15 industries in the U.S., Mexico and the United Arab Emirates.

“The brand has demonstrated an ability to entertain a diverse millennial audience through its extensive content,” said Mblm managing partner Mario Nararelli. “It is also continuing its expansion of services, including the launch of YouTube Music in 2018. Millennials in particular bond strongly with the media & entertainment industry and YouTube is doing a good job at building a brand that caters to the wants and needs of this audience.”

Instagram launched private Collections in 2017, which gave users the chance to save photos and videos in a private collection on their profile page. Now, they are toying with the idea to make Collections public where multiple users can contribute (like Pinterest).

Instagram is testing a new feature that will allow users to donate money to various nonprofits via their Instagram Story. Users would be able to search for a nonprofit and add it to their story. Then, other users could donate via that person’s story.

“We are in early stages and working hard to bring this experience to our community. Instagram is all about bringing you closer to the people and things you love, and a big part of that is showing support for and bringing awareness to meaningful communities and causes. Later this year, people will be able to raise money and help support nonprofits that are important to them through a donation sticker in Instagram Stories. We’re excited to bring this experience to our community and will share more updates in the coming months.”

This feature is similar to Facebook’s donate feature, which has raised $1 billion for nonprofits.

However, adding an Instagram donation feature would mean users would then need to add their credit card info allowing Facebook access to millions of credit card numbers that could potentially be used for other commerce features.

LinkedIn is finally offering LIVE video giving people and organizations the ability  to stream real-time video to select groups or to the LinkedIn world at large.

The idea is to be able to cover conferences, product announcements, Q&As, other events led by influencers, graduations, award ceremonies and more.

The feature is first launching in the U.S. in beta as an invitation-only offering.

Recently, a Google rep confirmed that approximately one-third of local searches are made with the intent of reading reviews. How many online reviews does your business have?

Having a strong online reputation will be a huge advantage over businesses that lack reviews.

Be sure you are asking for reviews!

But it goes beyond just receiving reviews. Make sure you are responding to reviews thanking customers or addressing their feedback, positive or negative. Well over 50% of consumers already expect responses within days of reviewing a business.

It never hurts to ask.

What do you think of these changes? Let us know in the comments!

Social media is always changing, and as marketers, we have to stay on top of it all. Come back in March for our next Lately in Social Media blog post.