We are officially one month down in 2019 (where has the time gone?!), and social media has already made a lot of updates and changes.

Not to mention, a photo of an egg became the most-liked picture on Instagram knocking Kylie Jenner out of the top spot…weird.

The plan will require Facebook employees to reconfigure how WhatsApp, Instagram and Facebook Messenger function at basic levels. Each app will still continue to operate as stand-alone apps, but employees will combine underlying technical infrastructure. This will allow users to communicate between platforms for the first time.

The plan is in its early stages and has a completion goal of 2020.

In a statement, Facebook said it wanted to “build the best messaging experiences we can; and people want messaging to be fast, simple, reliable and private. We’re working on making more of our messaging products end-to-end encrypted and considering ways to make it easier to reach friends and family across networks.”

On January 21, Facebook introduced a platform (Community Actions) where users create and sign petitions as well as tag relevant politicians. Users can create their own petition or find causes they want to support. Users can also tag a politician or government agency to send a notification about the petition.

The feature was mostly designed for local and state issues. You are not allowed to tag President Donald Trump or Vice President Mike Pence.

According to Facebook, the new tool will be moderated using algorithms, human staff and user flagging.

On an event page, the share button includes a “Share to Your Story” option for users who are part of the test. When watching a Facebook Story, friends can respond if they’re Interested or Going, which allows the original user who posted the Story to see which friends responded.

Before this test, Event pages allowed users to share via News Feed or Messenger, but Facebook has been working hard to update Stories since its launch to keep up with Instagram and Snapchat.

On January 17, Twitter fixed a FOUR-year-old bug that exposed protected tweets of some Android users.

The bug turned off protected tweets, a privacy setting that allows users to hide their posted tweets from the public, only allowing selected users access. According to Twitter, the protect your tweets setting turned off if you made certain account changes (like updating your account’s email address) between November 3, 2014, and January 14, 2019.

“We recognize and appreciate the trust you place in us and are committed to earning that trust every day. We’re very sorry this happened, and we’re conducting a full review to help prevent this from happening again.”

Twitter suffered other privacy woes in 2018 when a bug caused direct messages to send to people beyond just the intended recipient for more than a year.

Twitter on the web will have a new site design in the future. Twitter CEO Jack Dorsey also hinted at an app change as well.

The new desktop layout will have a two-column layout instead of three with the usual feed on the left and Trending Topics and Suggested Users on the right.

The update will also include:

There will also be an option to switch between an algorithm-based feed and a chronological feed faster as well as faster switching for users with multiple accounts. 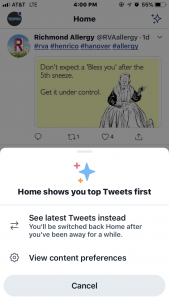 Four years ago, Twitter changed their timeline algorithm by showing tweets deemed more relevant to you as opposed to the latest tweets. Now, Twitter has finally brought back the reverse-chronological feed for both iOS and Android users.

Want to make the switch?

Keeping up with the latest news and events is important to users, so this update brings much excitement to Twitter’s community.

However, you may have to keep switching your preferences every time you open the app. Twitter will alert you if it switched your feed back to the algorithm-based view.

Because my name is Megan Fox, I know there are A LOT of fake accounts out there impersonating the other Megan Fox (I refer to myself as the better Megan). There are a lot of celebrity-impersonating accounts on Twitter, and these accounts like to take over conservations in Twitter Threads.

Twitter is now testing an “original tweeter” label that shows up beneath the account name of the person who started the thread each time they post a new message to it.

By identifying who started the conversation, you’re able to avoid abuse in cases where celebrities have imitators with similar account names and profile pictures who typically respond to threads.

It will also make scrolling through the thread much easier if you only want to read the original tweeter’s responses.

According to Sara Haider, Twitter’s director of product management,

“Twitter’s purpose is to serve the public conversation. As part of this work, we’re exploring adding more context to discussions by highlighting relevant replies — like those from the original tweeter.”

YouTube has updated its guidelines to make sure that dangerous or harmful prank or challenge videos don’t end up on the platform.

I’m sure you remember the Tide Pod Challenge, where people would actually eat laundry detergent. Recently, there were videos of people imitating the movie Bird Box by wearing blindfolds and performing dangerous activities like driving blindfolded and walking across train tracks blindfolded.

YouTube currently bans videos showing dangerous activities, but these new guidelines take it a step further by including pranks and challenges. The update doesn’t even allow videos where someone believes they’re in physical danger. This can include home-invasion setups, drive-by shooting pranks and fake bomb threats.

YouTube is giving creators two months to review their content. During that time, if the YouTube team finds dangerous prank or challenge videos first, they will remove them.

Instagram Stories now allows users to add their favorite songs to a video or photo.

You can choose music from one of three categories: Popular, Moods or Genres. But, you can also use a search feature to find a specific song. Instagram then gives you the opportunity to choose which part of the song you want to play.

You can also play a song as you record:

When you are about to publish a picture or video, you’ll see a Post to Other Accounts option with your accounts showing below it (you must be logged into the other accounts).

This will save users time who post to multiple accounts by not having them switch back and forth. Users who have multiple business accounts, similar photography accounts or users who are doing partnerships or takeovers with other accounts may benefit the most.

Unless you live under a rock, I’m sure you saw a picture of a random egg that recently beat Kylie Jenner for the record of most-liked Instagram picture. The egg has more than 51 million likes. Kylie’s birth announcement has 18 million.

Apparently, the egg’s name is Eugene.

What a fascinating world we live in today…

These were some of the biggest updates we saw in the social media world this month. For the rest of 2019, we can expect to see more user-generated content (USG), a rise in LIVE videos and gaining popularity for messaging apps and chatbots.

As a business, it’s important to promote your products and services. What better way to showcase your products than with pictures or videos of people using your products in real life? This is a great way to establish trust and become more personable. User-generated content creates brand awareness, engages your audience and leads to better customer experience.

We all know that video is more engaging than text. Individuals love visual experiences and feeling like they’re “part of the moment.” LIVE videos and streams are important for a number of reasons:

Experiment with messaging for your business. Messaging and chat makes it simple to connect and allows a business to have a personalized, one-to-one conversation with a potential customer when a lot of people don’t want to pick up a phone. They both can also provide instant customer service, improving the overall customer experience. Businesses can also program messaging and chatbots to answer basic customer questions.

I’m sure we will continue to see major social media platforms updates this year — for better or for worse. It will be interesting to see how these channels continue to keep up with us as consumers and keep us happy! Come back February for our next Lately in Social Media blog post.