You might have noticed that Facebook decided to dial back the descriptions that accompany its trending news topics. After coming under fire for accusations of editorial censorship, Facebook has been struggling to regain the public’s goodwill assumption that the trending topics are actually determined by an algorithm, not the company’s political bias. That’s why the platform says it made the call to drop the descriptions in favor of listing simplified topics and the number of people mentioning that topic in original or shared posts. Unfortunately for Facebook, the transition has been turbulent as they’re still sorting out their algorithm’s content kinks.

The good news in all this? If the system is mostly automated, Social Media Today theorizes that the trending section could become “prime real estate for branded campaigns” that achieve the magical number of mentions to be listed. That number depends on the date, time of day, region and competing topics, but if “McChicken” can achieve trending status for reasons we don’t suggest you look into, then imagine the reach a brand could achieve for a message they actually wanted to go viral. Until then, we’re patiently awaiting the day brands can pay for Twitter-style promoted trends.

In another, possibly more invasive move, Facebook videos are about to get louder. Facebook is testing how users react to autoplay videos with sound in their newsfeeds, which is somewhat interesting given the platform’s own research shows that 80 percent of users react negatively to autoplay videos with sound in their mobile newsfeeds. Whichever way this policy goes, it’s important for marketers to keep audio in mind when creating video content: How crucial is audio to your message, and how hard will you push users to listen if their default is to watch silently? For users enjoying video content in the privacy of their home, autoplay video with sound might not be a big deal. But for those of us who check Facebook at work, on the bus, or generally in the company of others, an autoplay video screaming from our phone or desktop induces a panic response and frantic grab for headphones.

Final thoughts: Have fun with audio, but be prepared for most users to watch your videos on silent. 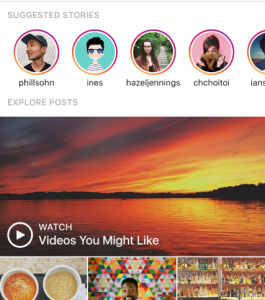 More than 100 million people are using Instagram Stories every day, and now Instagram has added Recommended Stories to the Explore section to help users branch out. Instagram’s advantage over Snapchat here is that Instagram’s algorithm can leverage the platform’s wealth of personal user data to suggest relevant Stories – something that Snapchat’s Discover feature makes difficult by design. By suggesting who to follow, Instagram makes building a personalized social network much more intuitive, which is even more advantageous for marketers looking to gain reach for their brand. We’ve said this before, but here’s yet another reason why Instagram Stories is looking better and better for social media marketing compared to Snapchat.

***UPDATE: Immediately after we declared that Instagram’s suggested Stories gave the platform an edge over Snapchat’s limited Discovery feature, Snapchat clapped back with an update that addressed that very complaint.

Discovery still isn’t as prominent as Instagram’s Explore, but you can at least view stories from users you don’t already follow, and it’s a step toward making it easier for users to connect with each other. Most of the new features in the update involve ways to edit and format text, filters and more that you can catch up with here. And marketers – you can also create your own custom geofilters here.

Snapchat and Instagram are continuing to battle it out for supremacy, and we’ll be watching to see if either platform takes the lead again with an exceptionally innovative feature. The pressure is really on for Snapchat, which needs to keep growing its user base to survive. Especially as advertisers are struggling to cram the perfect two-to-five second ad message between users’ stories and snaps. 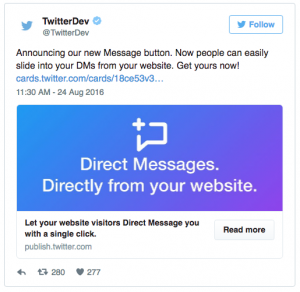 Twitter has been trying to compete with Facebook as the platform where businesses can communicate directly with their customers, and a new Twitter feature lets your website visitors slide straight into your DMs with the click of a button. The quick and direct nature of Twitter makes it an excellent platform for customer service, and businesses that already engage with customers this way can stick the button on their site for faster access.

Twitter is also pulling a YouTube and finally offering to pay video content creators in exchange for an ad revenue split deal (one that’s actually nicer than YouTube’s nearly-equal split). This provides a new platform and revenue stream for the big-name creators Twitter wants to attract, because it’s not requiring that the content be exclusive to Twitter. It’s not exactly a hotspot video destination like YouTube or Facebook, so what remains to be seen is whether this move comes too late to attract creators who are already killing it elsewhere.

And lastly, you can now put emojis in your Twitter name and bio. Because that’s what you’ve always wanted, right? 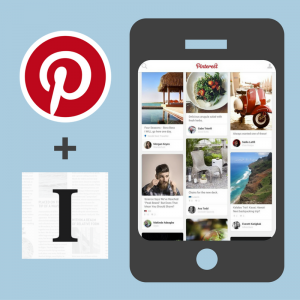 Pinterest operates like a hybrid of Google and Facebook, because it’s as much a search engine as it is a social platform. And like Facebook and Google, Pinterest is becoming more insular by keeping pinned content within the site or app. No longer just the world’s catalog of ideas, Pinterest is looking to become your biggest bookmarking platform with its recent acquisition of Instapaper, which allows users to save articles for later reading. Instapaper works by storing the actual content of an article so it can be read inside of the app without directing users to an outside site, similar to how Facebook Instant Articles load branded content without leaving Facebook. So it follows that once Pinterest absorbs this feature, pinned articles will “replant” their content within the Pinterest app and keep users on the platform, while creating more opportunities for Pinterest and marketers to gather data on their behavior. These deeper insights will be especially interesting for marketers who want better insights into how users engage with their content. 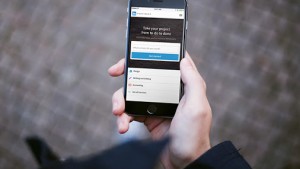 On a more B2B note, LinkedIn is now giving U.S. users greater access to ProFinder, which caters to job-seeking freelancers and the companies who look to hire them, but it’s separate from the traditional job-search function. Although ProFinder was originally only made available to a small number of users, there are now more than 50,000 LinkedIn-approved freelancers making use of the service, and LinkedIn has mentioned plans to take ProFinder international in the near future. Freelancing has grown 50% in the U.S. in the last five years, and studies predict that 40 percent of U.S. workers will be considered independent workers by 2020. Whether you’re a company that’s hiring freelancers for design and marketing work, or if you’re a freelance designer or marketer yourself, the opportunities presented by ProFinder, and the shifting workforce it reflects, will be very interesting as the gig economy continues to grow.