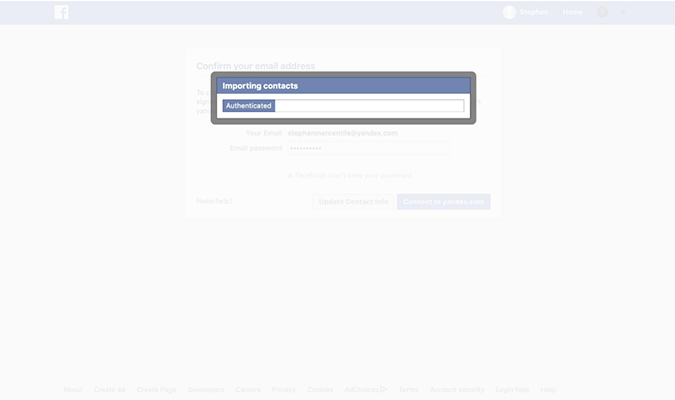 Lately in social media, Facebook has been suffering from very serious privacy flubs. This month, they suffered another one. The company accidentally uploaded email contacts of 1.5 MILLION users.

A couple of weeks ago, Facebook revealed personal data belonging to more than half a billion Facebook users was left exposed by third party apps on publicly visible Amazon cloud servers. In December of 2018, an API bug revealed the private photos of approximately 6.8 million users to third party apps. There was also the awful Cambridge Analytica Scandal that happened where Facebook acquired the data of tens of millions of users for political purposes.

Keep reading to learn how Facebook plans to remedy this latest privacy breach and to get up-to-date on more top social media news.

When signing up for new accounts, Facebook asked some users to enter their email passwords to verify their identities. Once you entered your password, a message popped up that alerted users Facebook was importing their contacts (without asking for permission first; yikes).

Facebook disclosed to Business Insider that they collected contacts this way to feed them into Facebook’s systems to improve ad targeting, to build Facebook’s web of social connections and to recommend friends to add.

Facebook preaches it did not access the content of user’s emails, only the contacts. But no matter how you look at it, this is still sensitive and private data.

“Last month we stopped offering email password verification as an option for people verifying their account when signing up for Facebook for the first time,” the company said. “We’ve fixed the underlying issue and are notifying people whose contacts were imported. People can also review and manage the contacts they share with Facebook in their settings.”

While Facebook tries to recover from that recent privacy blunder, here are some new features to look for:

Remember last month when we mentioned Twitter would launch a Hide Replies option? Well, Twitter officially released a launch date for this feature: June! However, it will launch as an experiment and could still be thrown away or tweaked depending on how Twitter users react.

The idea is for users to be able to filter content/replies that are irrelevant or toxic, allowing users to have more positive and meaningful conversations on the platform.

Last month we also discussed Twitter would be launching an experimental app, Twttr. This app would allow users to test new features and provide feedback. After a month of testing, it looks like this app is a hit among users!

Tested features include the removal of engagement buttons in conversation threads to give a less cluttered design, an author label indicating who the original poster in a thread is, as well as dark mode and improved functionality for the camera. You can still sign up for the experimental app here.

Just like on Facebook, you will soon be able to express love, curiosity and more with new reactions on LinkedIn. Other buttons include symbols for celebrate and insightful.

“You can use celebrate to praise an accomplishment or milestone like landing a new job or speaking at an event, or love to express deep resonance and support, like a conversation about work/life balance or the impact of mentorship,” Cissy Chen wrote, LinkedIn’s product manager. “Insightful can help you recognize a great point or interesting idea, while curious lets you show your desire to learn more or react to a thought-provoking topic.”

Instagram may be removing how many likes a photo receives. Likes may only be visible to the original poster. For a follower, the picture would simply read, “liked by [username] and others” without a number attached.

Instagram says, “We want your followers to focus on what you share, not how many likes our posts get.”

At Torx, we believe in the power of advertising on social media. New features and updates make the world of social media tricky to navigate alone. We can help you decide which platforms are best for your business and target audience and can develop a social media marketing strategy that will get you the results you want.

Are you ready to take the plunge into social media marketing for your business? Give us a call at 804-577-8679.

Be sure to stay tuned for next month’s social media roundup!