Case Study: Green Side Up Landscaping

Green Side Up Landscaping approached us in 2014 to help them with their website. Their site had a multitude of issues, including everything from poor navigation visibility/usability to not being mobile-friendly. Quite simply, the website wasn’t generating any business for owner Craig Attkisson. Additionally, even if the site was getting any traffic, Green Side Up had no idea as there was no analytics tracking installed to track web traffic and behavior. 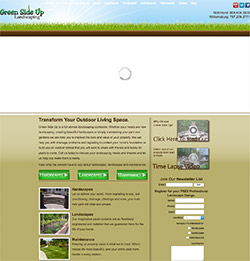 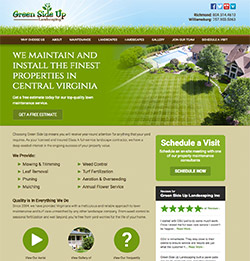 Above: A before and after look at the Green Side Up Landscaping website

We began our relationship with them and began work on fixing the most important site deficiencies. The site received a mobile-responsive layout retro-fit, we redesigned the header to make the navigation items easier to read, we simplified their “Request a Free Estimate” forms, and we installed Google Analytics so that we could begin to see the fruits of our labor.

Within the first 3 months of the revised site being online, Green Side Up began to see improved page traffic:

Now that we had a reasonably effective website to drive traffic to, we began to drive traffic to the site. We took control of Green Side Up’s social media and created a content marketing strategy that would tell Green Side Up’s story to their followers and convey their unique value proposition. Because their site was not ranking very well with search engines, we also began a search engine marketing campaign and a series of continued improvements to their site to improve organic search engine performance. We also created geographic location specific landing pages to cater to the two areas that they serve, Richmond and Williamsburg.

By mid-2016, the site was really running well. Year-over-year traffic was up about 66%. Site visitors were more engaged with improved bounce rates, and increased pages/session and session durations.

Green Side Up Landscaping is great example of our comprehensive approach to digital marketing. We improved their website to be the most effective sales tool in their arsenal, and then we drove highly targeted traffic to that site. The results have been astonishing and our client couldn’t be happier.